Sometimes, even after employing the best social media practices, things end up falling apart and you might end up with a PR nightmare on your hands

Whether you’re a close-knit, community-focused, small business or a multinational conglomerate, social media plays an important role in how people perceive, discover and engage with your brand. Almost 58.6% of American customers use social media to interact with their favourite business at least one to three times per day, therefore, it comes as no surprise that 92% of B2B marketers in North America are flocking to these platforms to boost their online presence.

In this tech-savvy, competitive landscape, it’s becoming increasingly difficult for brands to establish a distinct identity and stand out from the crowd. Sometimes, even after employing the best social media practices, things end up falling apart and you might end up with a PR nightmare on your hands.

In 2013, Kmart, the American department store chain announced that their doors will open at 6 a.m. on Thanksgiving (which is earlier than usual for them) and will continue to entertain customers for the next 41 hours to ensure a smooth Black Friday shopping experience. A lot of customers did not take kindly to their intention of making employees work through the holiday season and soon their social media (Facebook + Twitter) was flooded with angry messages from people.

In response, Kmart argued that the company uses season employees/staff for days like these, giving an opportunity to people who want to earn extra money. Sounds like a fair and reasonable response, isn’t it? Well, if they didn’t tweet that out to every single customer questioning their work ethics, they’d probably not land themselves in hot waters. In the next 48 hours, Kmart decided to send 150 canned responses to every customer that questioned their workplace policies and called them out for not letting employees have time-off for their families. 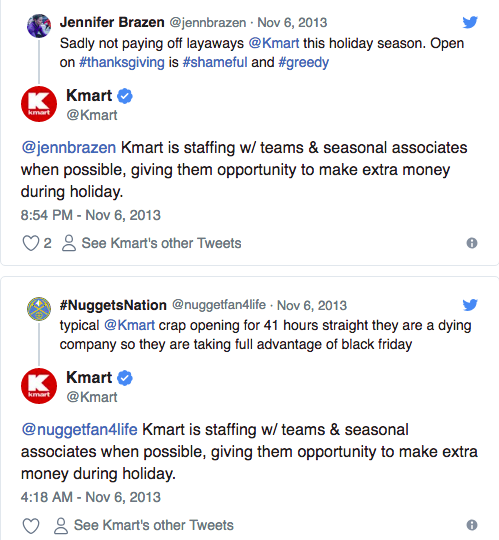 Funnily enough, their sister company Sears decided to add fuel to the fire by responding to their customers using the same template as Kmart.

We all know that most brands plan their publishing schedule and social media posts in advance, which is exactly what McDonald’s possibly did, as well. However, they went had a minor slip-up in 2013 while making a tweet about the Black Friday sale. What was supposed to be a compelling copy informing people about the upcoming sale/discount at the fast-food chain along with the link their customers could follow to get more details, this is what actually went out: 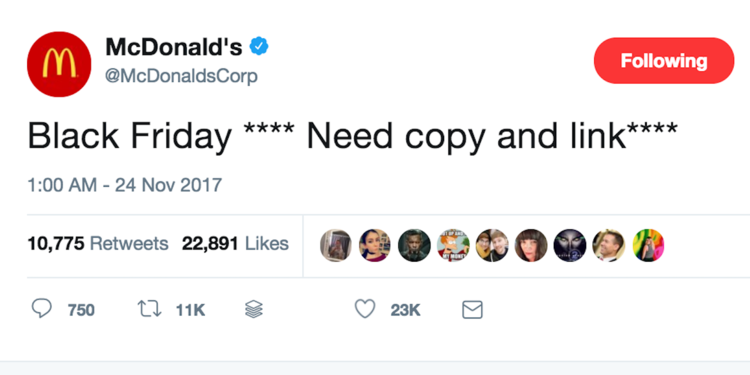 Of course, people were quick to pick up on the company’s accidental mishap and the tweet generated over a thousand replies ranging from, “Uh, ok hun,” to our personal favourite, “Didn’t really expect such a profound insight on the emptiness of Black Friday from McDonalds’ social media tbh.”

Instead of straight up deleting the tweet and rectifying the error, McDonald’s decided to find humour in the situation and followed up with the response below, which got a mostly positive reception from their followers: 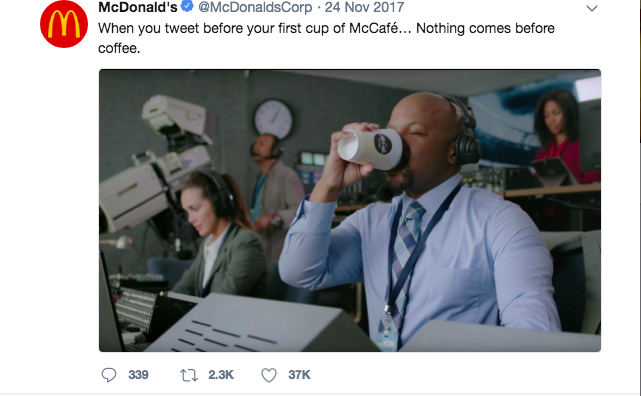 Nice save, McDonald’s! While leaving the placeholders in is an extremely common mistake, making the best of the situation is what’s going to land you in people’s good books!

While some of these mistakes can be attributed to human error and could have been easily avoided, a lot of times your thoroughly planned and extremely well-executed campaigns will end up missing the point. The most common mistake brands make while trying to get noticed on social media is that they focus more on talking to the customer than listening to them.

Apart from being aware of the latest pop culture and internet trends, it’s important that you get the basics right – for example, customers crave human interaction and will be disappointed if they are only fed canned responses. Similarly, 86% of customers seek out ‘authentic’ brands that they can relate to, so if you’re running a campaign that’s supposed to be ‘hip’ and ‘edgy’ – you might end up alienating a large chunk of your follower-base. Knowing your audience and the kind of content they expect to see from your brand is the key to publishing posts that leave a good impression.

How to Become an Expert in Social Media Marketing

Back to Marketing Insights
Next

Enhance Your SEO Strategy by Using These 12 SEO Platforms